Drosh & Lana will be bringing the music of GlumPuppet to ConnectiCon in what’s known as the ConnectiCrawl, an over age 21 show at some of the local bars in Hartford. In other words, Saturday evening there will be strange looking people in costumes roaming around Hartford (only this time they’ll have a good reason); the place will be “crawling” with cos-players!

GlumPuppet will be performing on Saturday, July 12 from 9:30pm-10:30pm at Black-Eyed Sally’s (350 Asylum St, No Cover). We’ll be performing a set of songs from our videos, other originals and cover tunes.

Since Black-eyed Sally’s is off-site, you probably can get in to see us play without being registered for ConnectiCon, but I would check ahead of time. If you ARE going to the Con (us cool peeps refer to it as “The Con”), stop by our booth in Exhibit Hall A; lucky number 13, and we might actually be there.

Also, the Dr. Who music video will be played during the Fan Made Video Contest from 3:30-5pm, Friday and 11am-1pm Saturday! See you there!

Lana and Drosh are happy to announce that they have released some of their music for download on Bandcamp!

Check them out here: 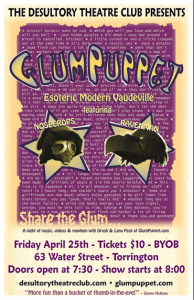